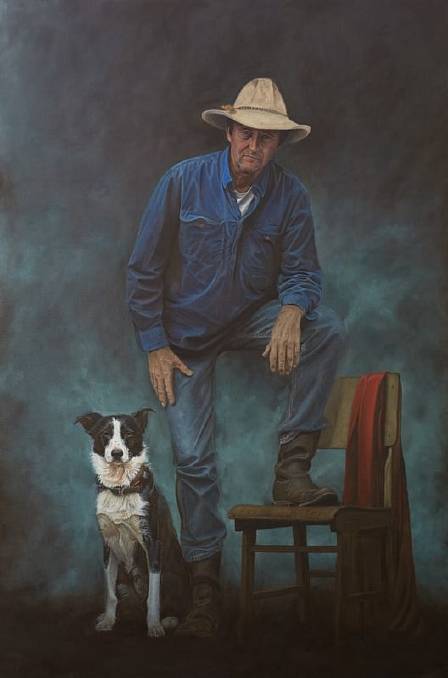 Bernie Shakeshaft is the founder and CEO of Backtrack, a youth support organisation that has been helping disadvantaged young people since 2006. I meet Bernie at an animal welfare conference in Armidale ten years ago. I was so impressed with his passion and enthusiasm for helping underprivileged kids. Bernie mantra is “keep kids alive, out of jail, and give them a chance to chase their hopes and dreams”. BackTrack’s participant are given the responsibility of a working dog. The relationship with a dog helps with confidence in teenagers who’ve been struggling with feelings of worthlessness. This year Bernie was named Australian of the Year Local Hero.

Join us for the NERAM unveiling of Bernie and Billy Local Heroes and a conversation with David Darcy and Bernie Shakeshaft as they discuss their unique relationship formed in the creation of this portrait as well as their respective work as artist and CEO of Backtrack.

David Darcy resides in the small township of Murrurundi in rural New South Wales. He received much acclaim as an author/photographer before he took up full-time painting in 2017. He was a finalist in the 2018 and 2019 Archibald Prize and won the 2019 ANZ People’s Choice award for his portrait Tjuparntarri – women’s business. Darcy was the people’s choice winner of the National Portrait Gallery’s inaugural Darling Portrait Prize in 2019.

Bernie Shakeshaft is the founder and CEO of BackTrack Youth Works in Armidale NSW. He has spent the past 25 years working and living out his passion…. catching wild dogs and wild kids.For many years he lived in the Northern Territory learning his trade in remote areas, learning the lessons of life in the bush and surrounded by wise and skilful Aboriginal men and old school stockmen.

In 2006 with his children growing up and forging their own paths in life, he was determined to turn his vision of working with the most disadvantaged young people in our communities into a reality. To keep them alive, out of jail and chasing their hopes and dreams. 2014 saw him travel overseas on a prestigious Churchill scholarship to learn from some extraordinary organisations that have helped develop the BackTrack model in Australia.

Under Bernie’s leadership, BackTrack has forged a new beginning for over a 1000 young people.Bernie takes great pride in how his vision of giving young people having a hard time a new life journey and a new beginning, is now spreading across NSW with mentoring other communities to get started using the same successful tools that have had remarkable results in Armidale.

“We’ve started something special here in Armidale.I’m proud of what has been achieved to date.The future is what I’m interested in and how we grow and extend new tracks going forward.”