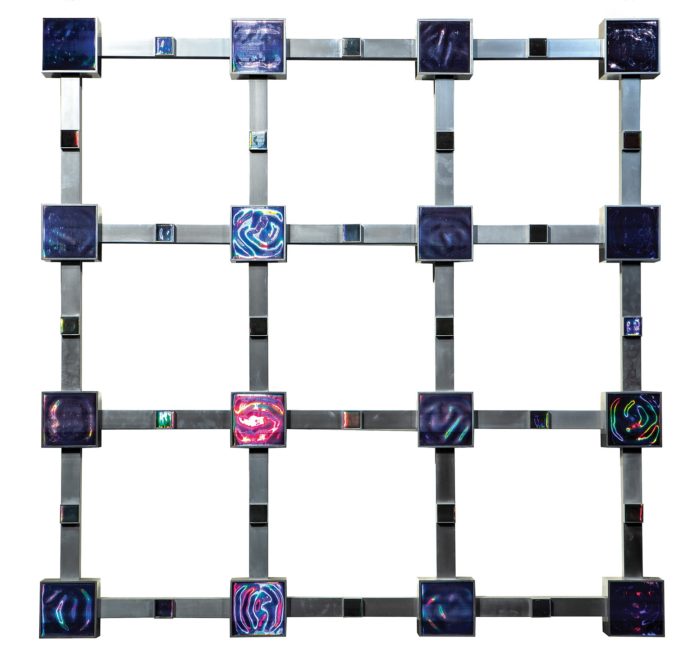 Lisa’s Lake by Robert Owen is this week’s #curatorspick from the COVENTRY exhibition.

Robert Owen’s art practice encompasses sculpture, installation, painting, photography and major public commissions. Throughout his work there is an overarching interest in light, colour and space. He studied sculpture under Lyndon Dadswell at the National Art School in Sydney and after graduating with honours, lived in Greece (1963–66) and London until 1975 after which he returned to Sydney. In 1988, he moved to Melbourne where he settled.

His time in Greece had a substantial impact of his work and Lisa’s Lake is a piece that shows its influence. At the time, there were scientific expeditions to view a solar eclipse and Owen became interested in the spectral effects of the sun’s rays through the atmosphere which acted like a prism. Owen was reminded of the physics of colour he had studied at art school and the experience triggered a fascination with light and refraction.

During his time on the Greek island of Hydra, Owen fell in with the expat community which also included Australian writers Charmian Clift and George Johnston, Canadian poet and songwriter Leonard Cohen and American poet Jack Hirschman. While in London, his circle expanded to include British constructivists Anthony Hill, John Ernest and Gillian Wise, who advocated a return to rational geometry in their work.

Lisa’s Lake embodies a melding of these two influences. The chrome-plated aluminium grid-like structure is constructivist in nature and the small cubes within contain spectral bands of colour that move and undulate depending on the light source and viewing position. It is a key work by Robert Owen and we are so very lucky to have it in the collection and exhibition.